Fear and Trembling by Amélie Nothomb 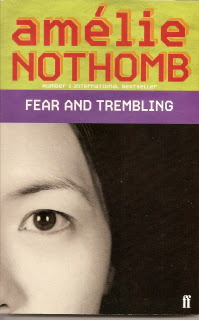 I’m not quite sure when I became aware of Amélie Nothomb. I’ve noticed her books for sale for several years, and I knew they weren’t new because they are readily available in French supermarkets, but why I should have noticed them above others, I don’t know.

Fear and Trembling, as many if not all of her books, is at least semi-autobiographical so as much as anything, I learnt about the author, and it rapidly became obvious that she is Belgian and not French. She was born in Japan to a family in the diplomatic service and lived there until she was five. She speaks fluent Japanese and did return to work in a Japanese company for a year.

Although for some reason I thought it was going to be a “difficult” book, it wasn’t at all: it’s entertaining and very easy to read. My usual caution about reading books in translation was totally swept away because at no point was I aware of its having been originally in French.

I don’t know whether the fairly dreadful portrayal of Japanese corporate life is accurate or not, but the most fascinating part of the book I found was the section about Japanese women, “if the Japanese woman is to be admired – and she is – it is because she doesn’t commit suicide”. Japan apparently has one of the highest suicide rates in the world, but in spite of the pressures put on them by society, the rate is very much lower in women than men. How much that holds true now I’m not sure.

Something I heard quite a while ago was also mentioned in the book. When people were starting to become aware of water conservation, a hotel said it would be very difficult to put effective measures in to reduce water consumption because a large portion of their clientele was Japanese. Apparently Japanese women become terminally embarrassed if they feel they can be overheard in the bathroom and will turn taps on full in order to prevent this. I never really knew if this was true, but Amélie Nothomb says the same thing.
I’d be happy to read any more of her books and I may even try one in French. I gather it was made into a film and released in 2004, so I must try to find it on DVD. According to the reports I’ve read, it is equally good.
Posted by A. at 17:09