In 1979 we had the opportunity to go to a business conference in Monte Carlo, or rather my husband did, I just tagged along.

The Principality of Monaco is made up of five areas:
Monaco-ville
Monte Carlo
Condamine
Moneghetti
Fontvieille

We stayed in Monte Carlo itself, in what was then called the Loews Monte Carlo and is now the Monte Carlo Grand Hotel. It was wonderful. 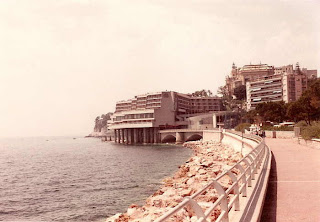 As you can see from our picture taken at the time, it is built on stilts over the sea. The F1 Grand Prix circuit goes through the tunnel under the hotel. 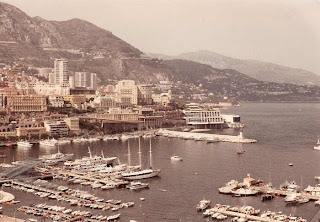 The other side of the hotel in the distance and a view of part of the port. These days there is nearly always a huge cruise ship somewhere offshore, resulting in sudden and large influxes of tourists. 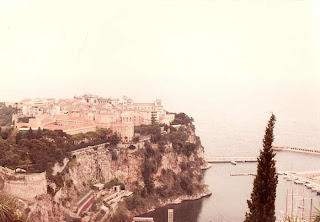 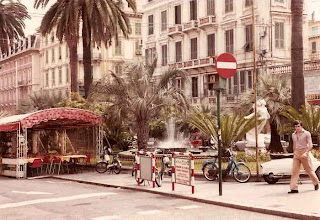 A street scene, not especially fascinating except for showing some of the typical architecture, and a young man in seventies style clothes. 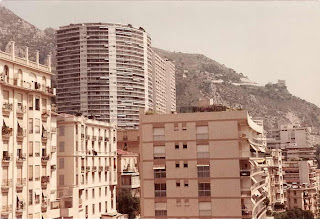 Again, not an especially inspiring picture in itself, and I've no idea why it was taken, unless it was some sort of premonition. That road on the left hand side leads to the place where one of our sons now works, and the other son's apartment is in the picture too.

These days of course we visit rather more often, so we rarely take any photos, but now that I have unearthed these old ones, it would be fun to take the up-to-date equivalents. There have been a lot of changes.

Claudie has lots of photos of modern Monaco, including an up-to-date version of my one overlooking the port. It looks remarkably similar after almost 30 years.