Yes we have more bananas

The last post and a follow up article from the Economist sent to me by Janeway has brought me back to my childhood in Africa.

The title of this post is taken from a song my father used to sing, completely out of tune as always. When we lived in Malawi he translated it, very roughly, into Nyanja. Purely from memory it went something like this (and I could be horribly wrong):

I remember too a conversation discussing whether all fruits have seeds. I racked my brains and finally said that bananas don't have seeds. But of course they do in the wild. 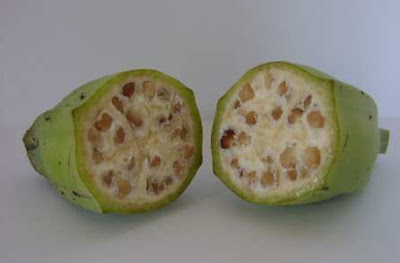 The seeds are hard and rather large. The first edible varieties probably arose by random mutation and it's thought they may have been cultivated for as long as 10,000 years

From the Economist article (no link as it is subscription only)

Cultivated bananas, like their cousins, the tropical staples cassava and taro, have a characteristic that makes them ideal food. They have no seeds. Unfortunately, the same characteristic means that it is fiendishly difficult to breed better bananas. This is an important task, as bananas are threatened by new kinds of pests and diseases. Furthermore, because bananas are clones, whole plantations could be devastated by such an attack.

The United Nations estimates that bananas are the fourth most important crop in the world, after wheat, rice and maize.

Leuven, as mentioned in my previous post, is the "banana capital" of the world. It houses 1,175 different varieties grown as tiny plants in test tubes. They have recently developed a less labour intensive method of storage, ways of deep-freezing banana samples. They have been able to show that, after five years in liquid nitrogen, banana cell suspensions can be recovered and turned into growing plants. And it is a second copy of all these samples that has been transported to Montpellier in the south of France.

Email ThisBlogThis!Share to TwitterShare to FacebookShare to Pinterest
Labels: agriculture