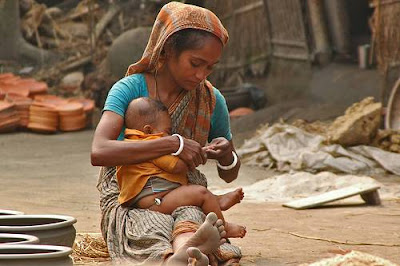 Photo from Flickr/M R Hasan. Creative Commons Licence.
The population of the UK is approximately 60 million. Bangladesh, roughly the same area, has a population of 150 million. People struggle to share resources. Over 90% of births occur at home with a traditional birth attendant whose practices are unlikely to have changed from those of 100 years ago. Her only equipment is a razor blade and a length of string.

Marjana, expecting her second child, lives over two hours away from the nearest hospital. If there is an emergency there will be little that can be done. She is 50 times more likely to die than a woman giving birth in the west. Women are encouraged not to breast feed for the first few days. If there is no other milk available, the baby will in effect be starved.

Four million babies in Bangladesh die within a month of birth, two million within the first day.

But things are improving. While the Millenium Development Goals are off target, the number of deaths in children under five has fallen by 50% since 1990. Microcredit programmes and increased school attendance are empowering women across Bangladesh.