I first saw Monaco in 1979.  I've been back a number of times but never really paid a great deal of attention to my surroundings.  During my recent holiday I had the opportunity to visit again, so I looked with fresh eyes -  and took some photographs.  This post, I'm afraid, will be very picture-heavy.  If you click on any of them, you will be able to see a larger version. 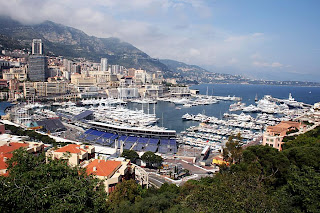 A classic shot of the area, La Condamine, and the harbour which has recently been enlarged to allow cruise liners to dock.  They used to have to anchor out in the bay. 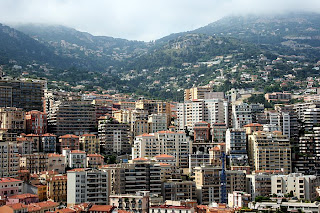 A view back over Monte Carlo residential area and up the cloud covered mountains behind.  Monaco's border doesn't extend far so many of the buildings you can see will be in France.  Beausoleil is directly behind Monaco. 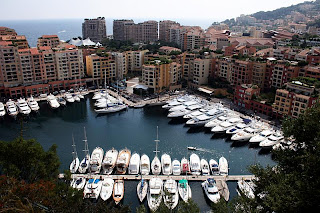 This area of Monaco is Fontvieille, a new area completely reclaimed from the sea.  The football stadium at the upper right marks the border with France.  You can see the roof-top gardens on many of the buildings.  Not visible here, but one or two even have a separate house or cabin on top.

The three pictures above were taken from the old town, Monaco-ville, which is probably the most interesting part of all. 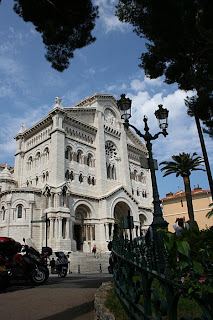 This is the cathedral, built on the site of the first parish church which dated from 1252.  The church was demolished in 1874 to allow the construction of the cathedral, using stone from La Turbie, which cleans itself and whitens in the rain. 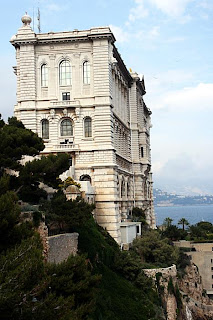 The Oceanographic Museum, which used to be directed by Jacques Cousteau, currently running an exhibition about the polar regions and their vulnerability.  Inside the rooms are ornate and beautiful.  The aquarium was visually stunning but some of the tanks seemed small.  There was one tank, a featureless column, filled with silver sea bass, all swimming in the same direction.  I suppose it's no worse than fish-farming but I felt uncomfortable that it was there for effect and entertainment. 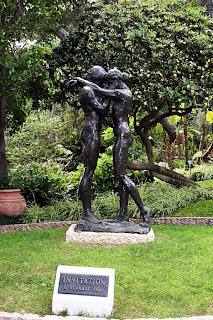 The Saint Martin Gardens surround the Oceanographic Museum.  There are sculptures everywhere in all the gardens I saw, all beautiful. 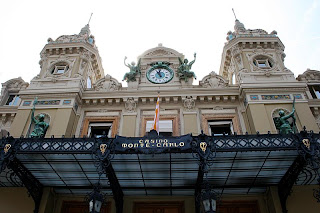 The Casino, everyone knows the Casino.  Taken close up because the view from further away was restricted.  You'll see why later. 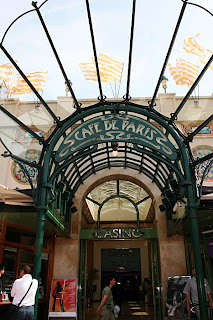 The Café de Paris entrance to the Casino.  The Brasserie is next door. 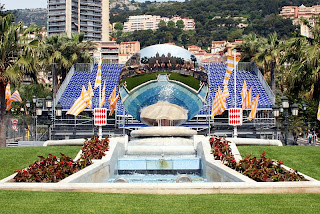 A fountain, with a reflective disc showing the casino, in the Boulingrins Gardens.  Apparently "boulingrins" is a distortion of "bowling green", one of those bits of trivia that appeal to me for some reason.  And here you see the reason many of my photos are from odd angles.  In the background are the stands for the upcoming Grand Prix.  Barriers, cranes, stands and scaffolding were everywhere.  Something of a contrast, I thought, with the concern for the environment expressed in the Oceanographic Museum.  Money talks. 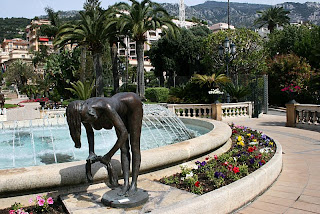 Another sculpture in the gardens, another odd angle. 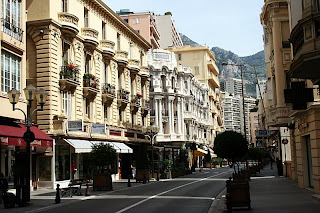 Boulevard d'Italie - the older style buildings with the modern in the background. 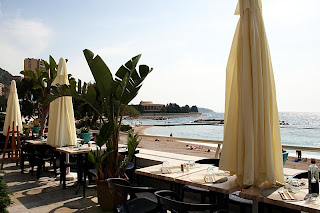 The beach, recently reclaimed land, with the Sporting Club in the background. 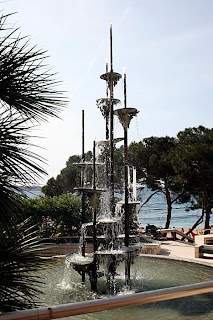 A fountain near the beach. 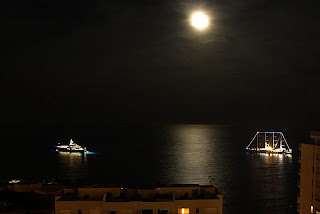 Two ships, one a cruise ship, the other privately owned, anchored in the bay at night to leave room in the harbour for a large cruise liner.  The blue lights allow for night-time swimming.  To me they seem to illustrate the romance of a different lifestyle.

If you're here for Canucklehead's Scavenger Hunt, I'm saying nothing.