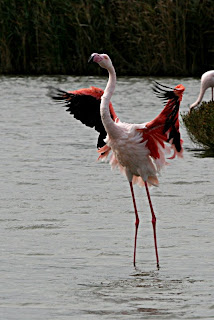 The Camargue, probably best know for its flamingos..... 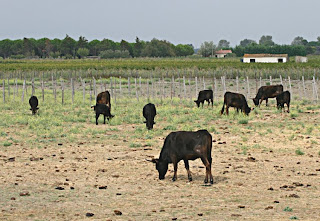 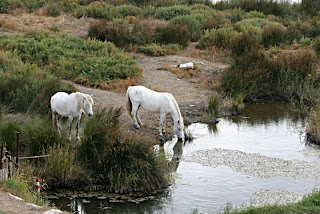 But it is under threat.

It's a beautiful, wild, different, part of the world.  I was dismayed, though, with some of the efforts being made to cater for tourists.  The white horses may roam freely in some parts but I saw many more of them tethered for hours by roadsides, to attract - possibly - passing holiday makers who might want a ride.  The black cattle pictured above, when they noticed the boat tour approaching, came running over to be fed with bread by the boat owners.  In the bird sanctuary there certainly were plenty of birds to be seen, but there were eagles, owls and others in cages!  All right, they were large cages, the birds could fly, but I do NOT want to see confined birds so close to one of the world's important nature reserves.

The whole area depends heavily on tourism as a source of employment, followed by agriculture and fishing, but it is difficult to maintain the right balance. 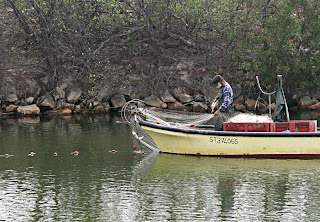 The delta is a vast plain where the Rhone splits and meets the sea.  It is criss-crossed by waterways, natural and man-made over the centuries. 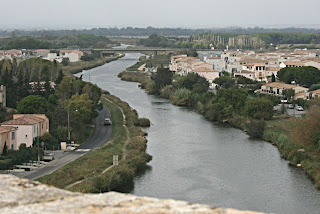 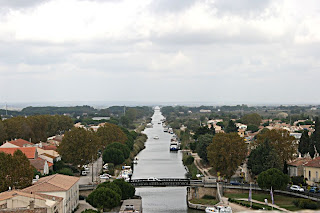 Both these pictures of canals were taken near Aigues Mortes, a mediaeval walled town and one of only two in the Camargue. 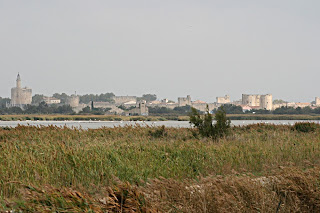 All these pictures look better enlarged, but this one in particular does.  Seeing this ancient walled city across the salt marshes is quite a sight. 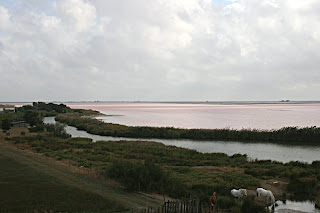 These salt marshes which turn pink in the summer months produce tons of salt every day - one of the major production areas in the world.

The whole area is in a delicate balance of fresh water, brackish and salty water; tourism vs wildlife; wildlife vs agriculture; pollution. Much of the wildlife is adapted to a particular niche and cannot tolerate a change.  And it's not just animal life - the reeds which can be seen growing everywhere can cope with a small amount of brackishness but not sea water.  They too are an important crop, used mainly for roof thatching.

If the climate were to change the equilibrium would be destroyed: the saltiness of the water could alter and rising water levels could flood much of the area.  The delta is rich in biological diversity, but it is very fragile.  The main priority for the National Park of the Camargue is respect for the environment.  We need in our turn to minimise our impact on the environment and climate to avoid losing the wonderful variety of life sheltered by reserves like the Camargue.

This post was published in support of Blog Action Day 2009.