A walk around Canterbury 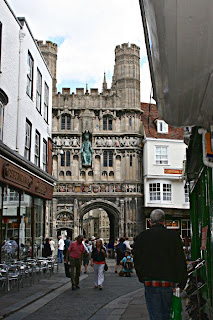 The first view of the Norman stone carved gateway into the cathedral.  Normally there are queues of people waiting to go in but this day there were far fewer people than I saw 18 months ago, and who were standing in the pouring rain.  However I hadn't come to see the cathedral, but for a walk around the small and ancient city, where every other building seems to be at least Grade II Listed, historic protected buildings. 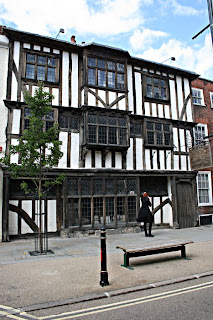 The original parts of this one, Conquest House, date from the Norman conquest in 1066, but it has been altered over the years and now appears to be 17th century.  Inside it retains Norman features.  It is said to be where the killers of Thomas a Beckett met to plan the murder. 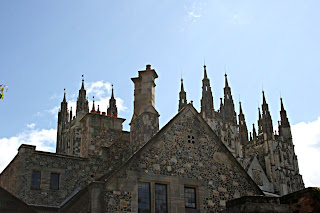 At every turn there are views of the cathedral. 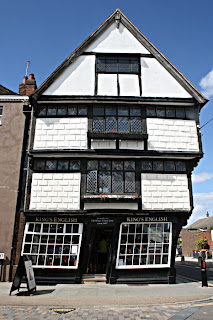 "... a very old house bulging out over the road ... leaning forward trying to see who was passing on the narrow pavement below ..." Charles Dickens 1849.

The inscription above the doorway I suspect has been added since this building became a bookshop.  It was once the King's School Tuck shop and is still known as that, probably one of the best known in Canterbury.  It dates from the 17th century.

I understand the door has been made to exaggerate the leaning of the building.  It has the most unusual effect when you go through because you lose reference to the vertical.  Quite dizzy-making!  I was brave though, and even went upstairs. 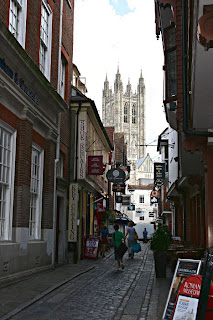 Another glimpse of the cathedral from a side street. 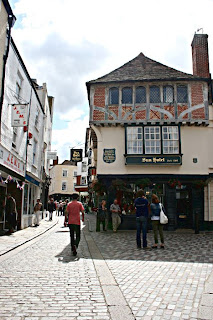 The sign on the building reads: "Sun Hotel formerly known as the Little Inn made famous by Chas. Dickens in his travels through Kent", and adds that the hotel dates from 1503 though the building may be much earlier.  It was the birthplace of John Lyly, a contemporary of Shakespeare.  The top floor has been restored recently. 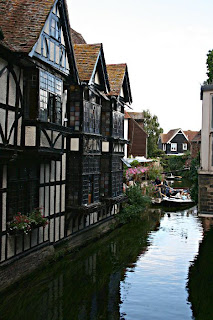 Walking down to the river you come across the Weavers' House built in 1500. French and Flemish weavers came to England to escape religious persecution and were given special rights and privileges. The leaning house I mentioned earlier is another weaver's house. The bridge over the River Stour. 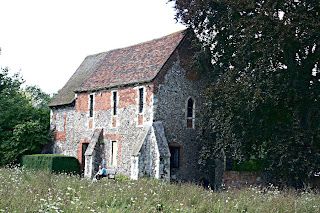 Following the river you come to Greyfriars chapel that actually straddles the Stour. It was built after the arrival of Franciscan monks in 1224.  It's in a wonderfully peaceful spot in spite of being no distance at all from the city centre.

That's more or less where I ended my visit, though I do have many more photos.  'll try to upload them to Flickr over the next few days, rather than bulk this out even further, and update the post with a link.

Canterbury is another UNESCO World Heritage Site but very fortunately, one that has much more to offer than the site itself.  History is oozing out of every brick and stone.  Having looked up the background of many of the buildings, of course I now want to go back and revisit.  Then there's the cathedral itself ....