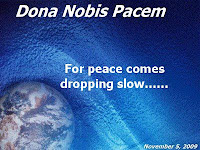 I have taken a quote from WB Yeats "Peace come dropping slow" completely out of context, but I was reminded of those words when I read the story of Samuel Mwangi who was caught up in the violence in Kenya two years ago.  He fled his home and is still in a refugee camp with his family.  Before the violence he had a five-acre farm and could have been considered prosperous in that area of the Rift Valley.  Now, two years later, he has managed to find work as a caretaker on a farm, and as a labourer.  He doesn't dare return to his home because his land has gone and he's afraid of being attacked again.

He is hoping that he may be given new land and he would be happy with that, no matter what sort of land it is.  "The most important thing is security".

He says being an international displaced person is like being in jail.  For Samuel and his family, peace is indeed dropping slowly.

"We cannot have peace if we are only concerned with peace. War is not an accident. It is the logical outcome of a certain way of life. If we want to attack war, we have to attack that way of life."
- A. J. Muste

"Peace is costly but it is worth the expense"
- African Proverb

Email ThisBlogThis!Share to TwitterShare to FacebookShare to Pinterest
Labels: Kenya