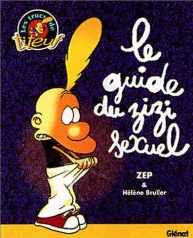 Since October, there has been an exhibition running at the Cité des Sciences intended to help pre-teens understand sexuality. It has been adapted from the book, Le guide du zizi sexuel by Zep and Hélène Bruller and is fun as well as educational. And fairly explicit.

I can imagine the outcry if there were a similar exhibition in London, but when you read any of the several reports about the teenage pregnancy rate in the UK not meeting the hoped-for targets, something must be done. According to the BBC report, the rate in the UK has fallen by 11% but it was hoped that it would be cut by 50% by 2010. The rate is three times that of France, so perhaps we could learn some lessons.

Intriguingly, the website for the exhibition in Paris, is also available in English. It runs until January 2009.